It is a fact that I am a shameless miser when it comes to gadgets, to the point that it bleeds into every facet of my life, including academics. So when my professor/mentor for this summer’s MUSE research suggested spending potentially $60 on a “cheap” particle disperser, I cringed.

Particle dispersers aren’t cheap to begin with. You can find them for hundreds, if not thousands of dollars online. During our research, we had uncovered a design for a low-cost disperser using a vacuum pump. It was, itself, a simple MacGyvering of off-the-shelf parts that was pretty good. In fact, it had been published. They had used a Pisco compressed air vacuum pump (schematic below) But that wasn’t good enough for me. I thought we could go even cheaper… and since I’m not going to publish my design, I’ll have to settle for blogging about it.

The vacuum pump has no moving parts and works pretty simply. Compressed air from the bottom is shot straight up through a nozzle, and as it expands upward, it pulls air with it (from the side). The suction also pulls in particles and expels them at the top, thus: a cheap particle disperser. In more scientific terms, it’s Bernoulli’s principle in action. High velocity air = low pressure generated. I thought to myself: “This basic design has to exist somewhere else… and for cheaper!” Then it struck me. A Bunsen burner.

For those of you who never made it past high school chemistry, a Bunsen burner is a nozzle that shoots natural gas up a long metal tube. At the base of the tube, there are slits where air is sucked in with the natural gas for combustion. I shamelessly suggested my wild idea to my professor who gave us the green light to commandeer a burner from the Chemistry department. I will say that our Bunsen Burner heist was not as boldly fantastic as I would have liked. Instead of rappelling down through air vents, we walked in and asked them for one. 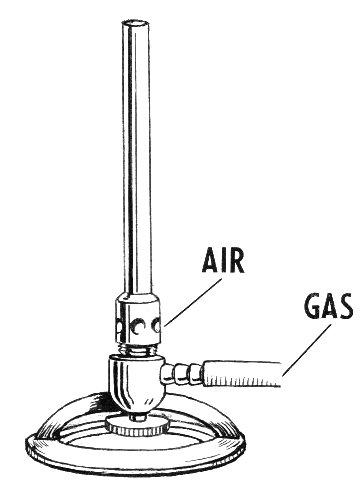 The result is a $4 particle disperser, at least 5 times cheaper than a published “low-cost” particle disperser. And it still works! We were able to reliably inject pollen into the wind tunnel using the design. Ridiculous repurposing for the win!

P.S. – We fixed a hole in the plastic honeycomb with drinking straws. And the funnel taped to the carbon fiber tube is to direct oil droplets being expelled from an oil disperser (read: Fog Machine).